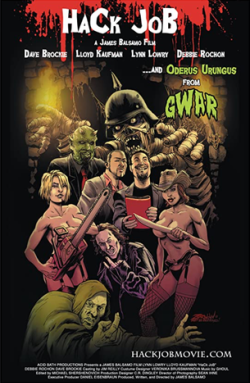 An anthology film with three stories all taking place in the same small town. James and Mike are tired of art films taking away the credit that horror films deserve. So, they get a script of three stories from the devil to make the best horror film ever.
The first story is about Nazis that awaken a mummy's curse. An alien crashes a battle of the bands and starts eating the contestants in the second story. The finale is about a man who gets possessed to kill televangelists...you will never guess who possessed him. 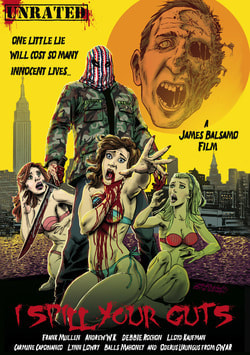 Two friends, Dennis and Joe, join the military together. While on a routine mission, the two are quickly surrounded by enemy fire. When Joe stands up to run, Dennis pushes him out of the way and takes a bullet in the throat only to wake up in the hospital to find Joe rewarded as a hero. Joe took all the glory, and Dennis was left as a mute from the accident. Dennis can't talk, but actions speak louder than words. He wants revenge on Joe, so he will kill everyone close to him. One little lie will cost so many innocent lives. 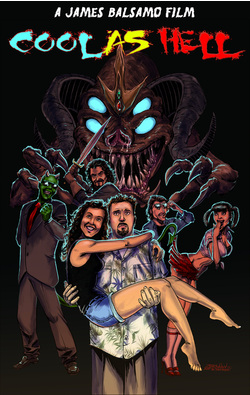 Rich and Benny are having trouble with the ladies, until they befriend a demon named Az. It's a non-stop party until a soul hungry beast leaps through an open portal from the underworld and starts terrorizing the town. It's up to Az and the boys to send the creature back to the depths which it came, and look good while doing it. 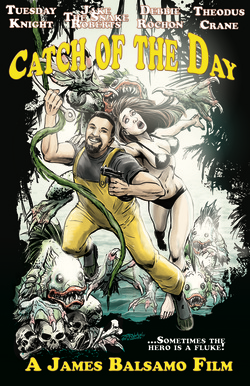 Officer Rod Davis becomes embedded undercover when a cartel starts bringing drugs into the city through fish shipments. He soon finds himself and his city under siege when a scientist accidentally creates mutant fish people with a poisonous bite. It's up to the rookie cop and a sexy lab assistant to find the drug stash and destroy the crime lord controlling the mutant monsters. See the badge, bass, and ass in a horror-comedy that you won't want to throw back. 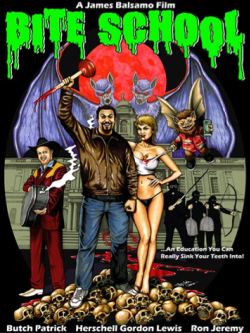 Tony's life takes a sudden turn after his grandfather cuts him off from his inheritance – that is, unless Tony goes to night school to get his GED. With his fortune on the line, Tony goes back to school, falls in love with his classmate Vicky who turns out to be a vampire priestess, and makes friends with her roommate a Hawaiian-shirt wearing, pot smoking bat named Spat. When a blood moon rises, the priestess shows her true form as a two-headed bat creature with a snake body. Armed only with his sharpened plunger, Tony will need to stop her from destroying the world. But killing the beast and studying for a final won’t be easy. See the most outrageous vampire horror-comedy that doesn’t suck. It’s an education you can really sink your teeth into! 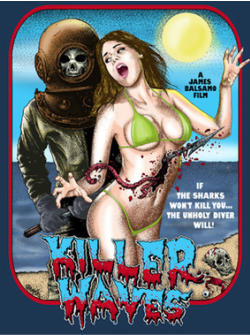 Beware! The Unholy Diver is killing surfers to make a human flesh surfboard. Detective Charlie Holster is  working day and night to solve the strange disappearances of people and the stranger appearances of body parts washing up on the beach. Big breasted bikini babes are turned into piles of blood and gore, while Detective Holster shakes up the streets of Los Angeles tracking down this maniac. When you come to this beach don't forget to bring a towel, and a casket! Let this tidal wave of blood wash over you in "Killer Waves".
​
Starring James Balsamo, Phil Anselmo, Chris Mulkey, and Robert Maillet
Directed by James Balsamo
BUY NOW 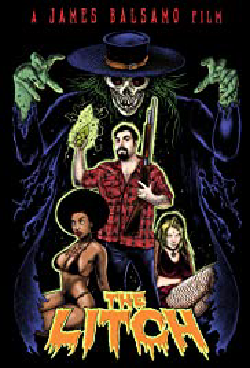 An undead zombie wizard known as "The Litch" is hell-bent on devouring his victims and possessing the weak when his sacred crystal is stolen by a small-time crook and his crew of big-breasted witches. The Litch uses its power to transform into slimy mutant creatures, spilling gallons of blood from his victims on his quest to retrieve the crystal in order to rule the four worlds. This action-packed horror comedy will keep you on the edge of your seat as The Litch raises the dead and assembles an army of zombies to retrieve the crystal. He's not a demon, he's not a witch, so run for your life, here comes The Litch. 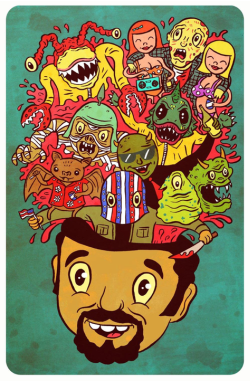 Your brain will pour out of your ears and ooze down the side of your face while you see Zombies, Ghouls, and things that will make your skin crawl off of your bones in "Mind Melters!" A collection of the madman himself James Balsamo's short films. Including the never before released "Gory Tits" featuring the theme song by legendary death metal band Suffocation. Starring Lead singer of the band Frank Mullen himself. See this gore masterpiece as well as a dozen other James Balsamo's short horror and Science Fiction fears brought to life right in front of your eyes in "Mind Melters".
​
Starring James Balsamo, Frank Mullen, and Genoveva Rossi
​Directed by James Balsamo
BUY NOW 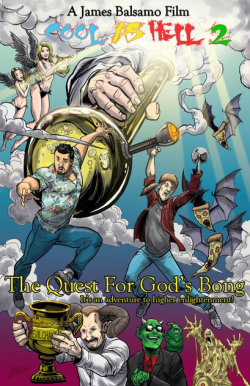 After goofball Rich accidentally decapitates his best friend Benny while trimming a Christmas tree with a machete, he's forced to go on a quest to find God's bong and use it to bring his friend back to life. Az the Demon and Boogar. 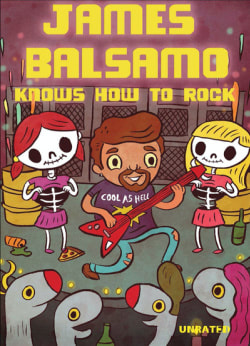 Before James Balsamo filmed slimy creatures and big-breasted bikini babes as a Hollywood director, he played in bands. Be ready to head bang and rock along with the wild and wacky music videos from those bands! See James Balsamo jump from genre to genre playing punk to metal to even an acoustic guitar, all while a 7-foot robot badger decapitates a hip hop robot with a sword on stage. There’s a ton of wacky music video madness in “James Knows How to Rock”
​
Starring James Balsamo
Directed by James Balsamo
BUY NOW 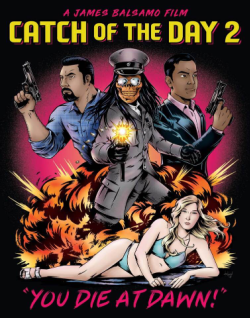 Crashing funerals, digging through corpses to find drugs, and busting big-breasted bad girls is all in a days work for Officer Rod Davis.

See blood, guts, and butts in the “breast” clips from over ten Acid Bath Productions films. Numerous naughty girls and murderous monsters will crawl across your screen in this uncensored cinema. Filled with scantily-clad centerfolds and beasts from the center of the earth looking for lust and busts only found in college coeds soon to be dead. See an array of bras hit the floor and stockings ripped to gore in James Balsamo’s “Sexy Time” 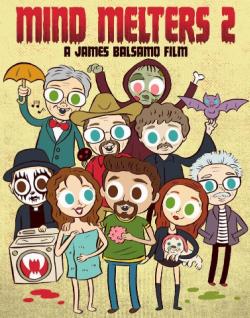 Ghosts soaping up big breasted beauties, striping secretaries getting slaughered, and mutant dog monsters running a muck with Craig Muckler from "Microwave Massacre" is just the beginning of the moral depravity stuffed into MInd Melters 2! Also see director James Balsamo have an In-depth interview with legendary horror director Ted Nicolaou. Turn up the volume and lock your bedroom door to enjoy this naughty nightmare filled with short films to liquify your brain in "Mind Melters 2" 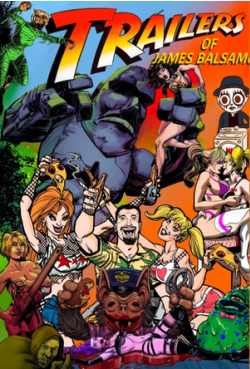 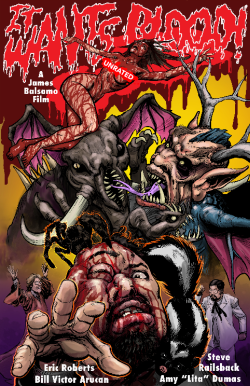 Two giant monsters are forced to battle head to screaming head on the political circuit as they run against each other for a seat as a senator. But the unsuspecting public doesn't realize there are actually creatures that each running mate owns, feasting on helpless, big-breasted, quivering-lipped women and charity-thieving priests. The perils of politics never involved two enormous behemoths fighting to the death...until now! You’ll be on the edge of your seat watching fangs feasting on heaps of flesh as beautiful babes are fed to the beasts in "It Wants Blood!"
​
Starring James Balsamo, Eric Roberts, and Ola Ray
​Directed by James Balsamo
BUY NOW 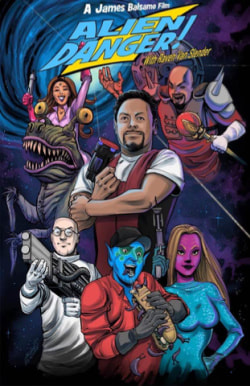 Raven Van Slender and Phiz get sucked into space to stop an intergalactic tyrant's appetite for destruction before Earth is on the menu! Along his journey, Raven picks up a crew of misfit aliens that both help and complicate this silly smorgasbord in space. Make yourself a nice slug sandwich and sit back and watch the sci-fi comedy of the century with James Balsamo's "Alien Danger! With Raven Van Slender". 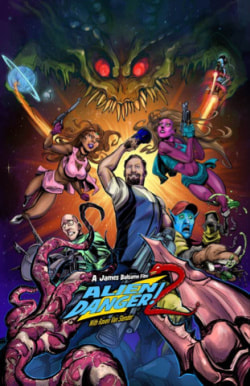 Raven Van Slender and Phiz go on another cosmic adventure with the whole gang, and a couple new alien friends. This time they battle mega genius General Legs. See all new creatures and blue aliens from another dimension fight it out on a galactic scale in Alien Danger 2! With Raven Van Slender. 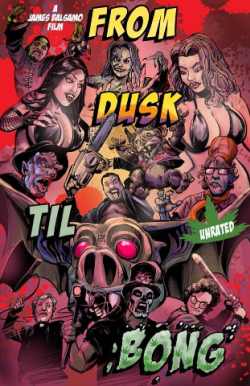 Tony and Spat, the Hawaiian shirt wearing bat have to smoke lots of weed before a vampire pizza party goes all wrong! While Screaming Jay pigeons has to rip out vampires eyes to travel to another dimension to save his love lenora from the after life and fight the lizard people to do so!

SEXY TIME 2 2022
​ A collection of the "Breast" clips from mad man director James Balsamo. See scantly clad scenes from such films as "From Dusk
Till Bong!", "It Wants Blood 1 & 2", "Hollywood Werewolf" , "Killer Waves 2" and a music video too sexy for TV from James Balsamo's
new band Wizards of Pleasure. Acid Bath Productions puts the ass in class! Watch it now!

After how incredibly hot Sexy Time 2 came out, we couldn't wait to put out the third! The very first ThrillOgy has arrived! The movie  that's so nice we did it thrice! See the breast clips from multiple James Balsamo films for a third time. Featuring clips from "Mind   Melters 3", "Hollywood Werewolf", You're Melting!", "Killer Waves 2", and more! 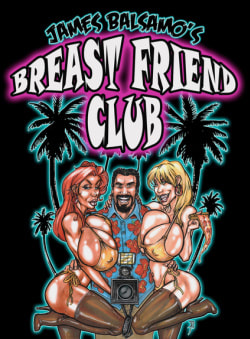 This is James Balsamo's Breast In Show! A compilation of the sexxxiest moments in so many films we can't count. The only thing you'll be counting is the hot babes and the sets of personalities on the screen. Don't wait; get your kicks now! 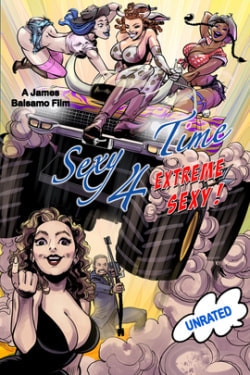 The highly anticipated next installment in the SEXY TIME COLLECTION is here! With more busty babes than you can count, SEXY TIME 4 is one for the record books. Treat yourself today to beautiful sexy women who love to show off the goods.